An efficient mould is a goal to achieve in order to maximise efficiency in companies that produce PET preforms, decreasing operating costs.

For this reason it is advisable to consider the more innovative systems with reference to high performance injection moulds.

Optimum installation of the injection mould: what to do and what to avoid

First of all, installing the mould easily means no loss of time and helps minimise “unproductive” periods.

Typically, installation of the injection mould for PET packaging, which can weight between 2 and 6 tons, is a laborious operation.

It is a step that requires many hours and needs to be carried out in a competent manner to avoid problems during start up, as well as possible damage to the mould itself when it is in use.

One of the most critical phases is alignment of the two half moulds which, in conventional moulds, is carried out using test equipment and instruments and special procedures.

With the injection mould designed by SIPA and fitted with XGUIDE this operation is simplified, as the system eliminates most of the alignment operations, having two half moulds that are coupled and perfectly aligned.

Thanks to the advice and assistance of SIPA installation proceeds quickly, easily and precisely, skipping the difficult and boring procedures necessary for traditional moulds.

This specific feature also means savings in time, so also in money: it actually reduces set-up activities by at least one hour and allows preform production to be started more quickly.

During mould operation there are unproductive periods in which the system is stopped for ordinary maintenance activities.

One of these activities consists in lubrication of the sliding components, including sliders and bushings.

Some of the precautions taken by SIPA optimise certain aspects.

The moulds patented by the Italian company actually do not require these operations, as they are equipped with self-lubricating components.

This means that the cleaning times, necessary to eliminate old lubricant and apply the new one, are reduced to zero.

Routine maintenance of the Hot runner VS self-cleaning Hot runner

Another activity that usually requires line downtime is that relating to maintenance of the hot half of the mould (hot runner).

The current market standard requires the activities to clean away the PET dust created during operation of the plant have to be carried out at a frequency that ranges between less than one and up to three million cycles, according to the application.

In addition to this, it is necessary to bear in mind that maintenance to replace worn components, again with regard to the hot runner system, takes place at intervals that vary from two to five million cycles, according to the type of application.

This means that having a self-cleaning hot runner, like the one manufactured by SIPA, minimises maintenance times for this component.

Because in this case it is not necessary to carry out normal maintenance, or in any case it has to be carried out much less frequently.

This is because SIPA has developed a patented system that allows cleaning of the internal volume of the shutter cylinders. This is done using the same air that drives the piston and that, flowing into a special channel, allows elimination of the small number of particles that are generated during each cycle.

If they are not removed, these particles will build up cycle after cycle, until they produce a volume of dust that will prevent movement of the pistons and will therefore force a stoppage in production. 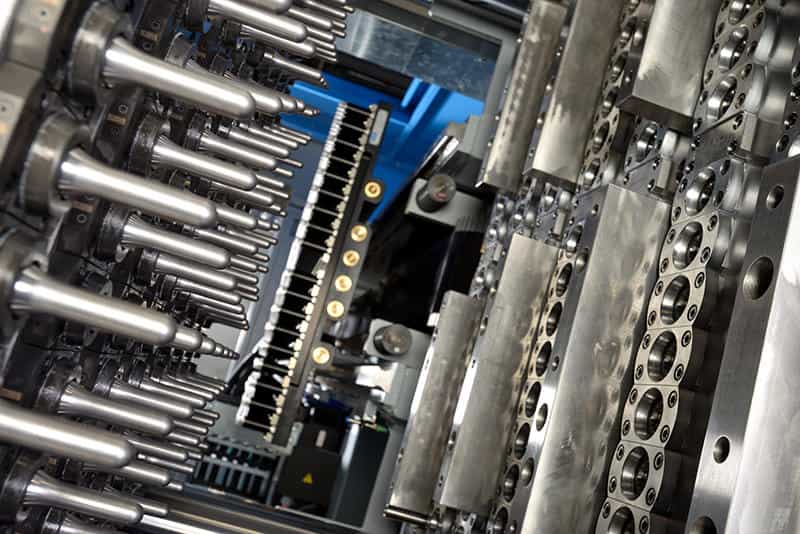 For injection moulds, having high quality vents means increasing the intervals between maintenance operations throughout the year to clean the machine.

This results in increased plant efficiency.

The vents are small openings located in specific points on the mould, to allow the air contained in the mould when the PET is injected to flow out.

It is injection of the PET itself that pushes the air out. These openings are very small, because they have to allow the air to come out without, at the same time, allowing the plastic (PET) to do so.

The vents are liable to become dirty and blocked, because the air flowing through them is not completely clean. It is necessary to take into account the contamination due to gas created by melting of the PET and the consequent condensation that forms on the surfaces of the vents.

As the vents are extremely small (a few hundredths of a millimetre) they tend to become blocked and lose their ability to function.

When this happens it is necessary to stop production and clean the surface of the vents, an operation that requires several hours and that typically, in conventional systems, has to be carried out once or twice a week, according to the application and the resins used.

SIPA has patented a solution that empties the air from the mould during a phase preceding injection, using a specific vacuum system.

In this way the energy needed to empty the cavity is considerably reduced, while at the same time blockage of the mould is limited.

This means that the operations needed to clean the vents are also drastically reduced.